I thought about not adding in the ‘service announcement’ portion of this post, but politicizing crafting irritates me to no end.  *I am boycotting Jo-Ann Fabrics.  They sent me an e-mail asking me to oppose the tariff because it would increase the cost of their supplies thereby increasing the cost of my ‘American Made’ crafts.  Shinybees podcast just recently mentioned something about that, how a yarn slaps the label on in Britain and calls itself a British Yarn.  Jo-Ann Fabrics buys most of its supplies inexpensively overseas, marks it up horribly so that they can put out their ‘40% off’ coupons all the time, and then sells it to crafters that then create something from those supplies.  If I oppose the tariff it would be for reasons other than to keep Jo-Anns making a fortune off of marking up foreign goods.  If I were to support the tariff I might say that marking up foreign goods may give some domestic products a chance to flourish, but I do not know enough about economics to make an educated guess.* End Service announcement.

I am currently getting ready for a class that I will be teaching in October on Latch Hooking.  Over the past couple of years of teaching crafting classes my students have mentioned that I am willing to  work on just about any craft.  That is true, I love crafting and I adore that I can figure out just about any craft there is.  I’m not always good at them, and sometimes I get bored, but I can usually figure them out.  Latch Hooking is a very simple craft, take a small length of yarn use a tool to form a larks head knot over a piece of canvas  and repeat ad Infinium until you are done with the yarn, and pattern.  I will create a tutorial with step by step instructions and be done with it until the class in October.

More interesting I just received permission to do a Book Binding series of craft classes for NaNoWriMo or National Novel Writing Month in November which is also National Family Stories Month.  The act of binding a book is really three acts that are rolled into one.  First the Cover must be created, then the pages to go inside the cover and finally the entire thing must be assembled.  Since there is considerable amounts of glue involved in the process these three steps need time to dry in between.  A week should do it.  So there will be three separate classes on book binding.

Among all of this I did manage to get some spinning done, Moon Rock Farm of Western N 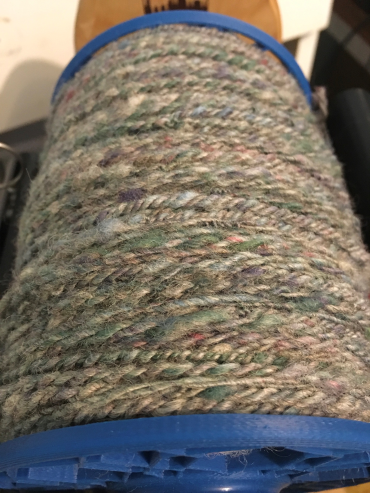 ew York has a sheep named Elvira.  I obtained about 8 ounces of Elvira, the wool spins like a dream, and managed to spin over 148 yards of a 3 ply yarn.  The yarn is 10 wraps per inch, so the yarn is considered a worsted weight yarn.

So I will leave you with a picture of a full bobbin and wishes for Happy Crafting!