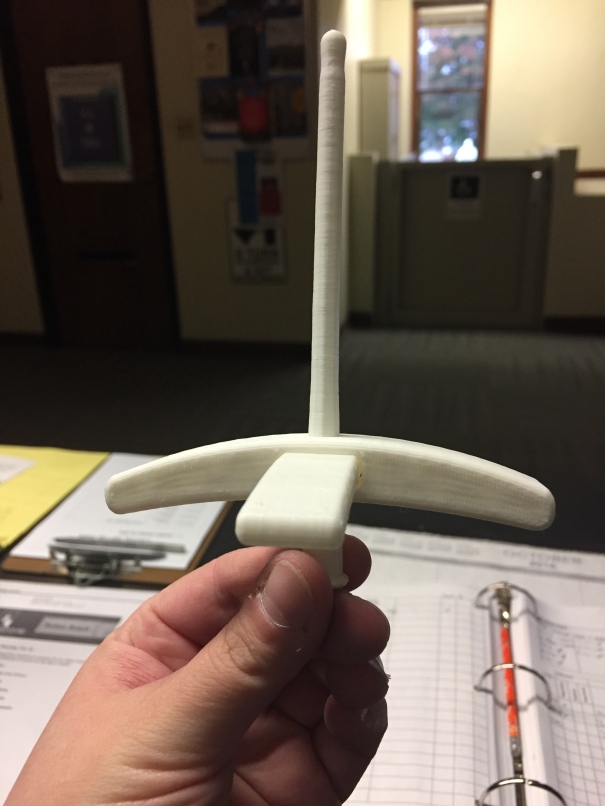 I managed to download this pattern from Thingiverse and it was created by kg6gfq.   One of the libraries that I work at obtained a 3d printer about a year ago but I have not heard of it being utilized too much.    Being the very curious person I am I decided to poke that particular rattlesnake and print something out.  I checked out Thingiverse and found Drop spindles, bobbins, even the plans for an Espinner out of printed materials.  I was over the moon, so I downloaded the ones I liked, came into work a couple of hours early, and started to mess around figuring things out.  The first thing I found out was that none of the files were in a format I could use.  Some checking around led me to believe that I needed them in Makerbot Formula.  None of the libraries computers had that format so I would have to bring my laptop next time (my home computer is a Mac but my Laptop runs Windows 10) install Makerbot and see what I could do.

The next week I brought my laptop in (I only work at that library once a week) downloaded the software and began to convert the files, it was actually pretty simple once the program was installed.  I was very happy thinking that I would now be able to print out, at least, my 3d spindle.  I went home pleased with how next week was going to go.

The third week into my venture I went to work an hour early to see about getting my printout started.  I plugged my usb drive in and went through the materials I wanted printed.  Everything worked perfectly, time estimates, printing sizes, etc.  Except that nothing would print out.  There was no filament waiting to be used to print.  Darn.  I looked around a bit and finally had to admit, I was going to have to ask someone.

After a couple of e-mails and a further couple of weeks I now have my 3d printed turkish spindle.  While it would have been a lot less aggravation to just order the thing from Turtlemade or another company that prints them, I am pleased that I now know how to convert a file to be usable on a Makerbot printer.  My next steps are to see about creating an original pattern to print out, finding out what they are going to charge in the future for printing jobs, and testing out my spindle.  I knew I should have brought fiber to work with me, lol.