The Loom is now complete!  I cannot believe how well it turned out.  The pedals still do not work but I managed to rig up some Texsolv Cord and Arrow clips (that are specific to the cord) so that I am able to treadle with them.  I did have to tie them up in a 1, 3, 4, 2 pattern instead of 1, 2, 3, 4.  When I tried tying them up straight from 1-4 then I could not press down on 1 enough to get a good shed (lift the yarn enough to pass the shuttle through).

Before the next part, I have to give you some background information.  I live with my mother on almost 2 acres of land.  We are surrounded by a bit of forest.  The house is built into a hill, which really helps avoid flooding, with a garage under the house and another detached garage.  We use the garage under the house for the car (we share one between us), and have not been using the detached garage for much of anything since my father died 7 years ago.  This is why my weaving has stalled.

While we have not been using the garage, other creatures have decided to move in.  Specifically there are some PVC pipes on a metal rack that a family of mice has decided to move into.  This was actually alright with me for a little while, I set out traps and would play music to keep them away thinking that the traps would get them overnight one of these days.  This worked long enough for me to get a bit of a sampler project done, then one day I looked up and found a face peeking at me out of the PVC pipe.  Well that was the end of my weaving until we get someone in to get rid of the mice.  My bravery only goes so far, telling a patron that I am pretty sure is high that they need to leave the library, keep it down, watch their language; Fine.  Telling a patron that I know is drunk that they need to leave the cashbox right where it is, and taking it out of their hands; Fine.  Mice around when I am trying to relax and concentrate on my weaving; NOT FINE! 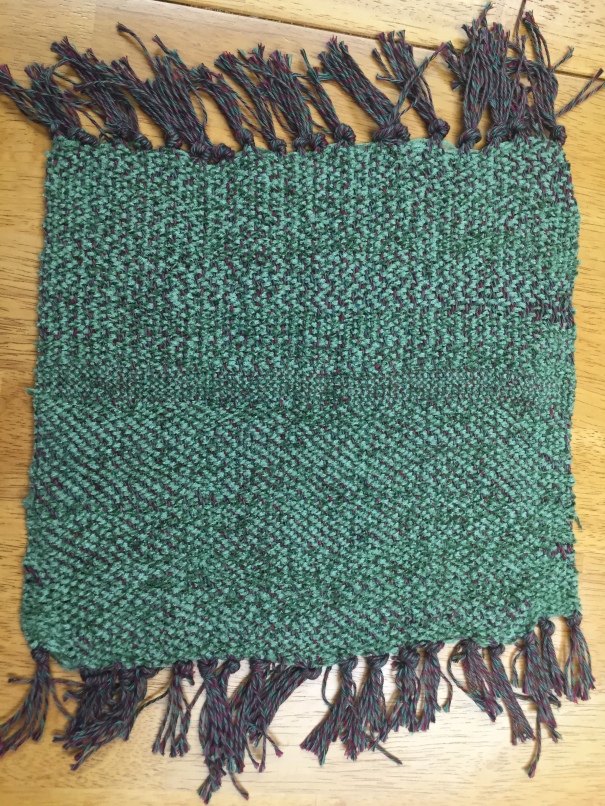 I managed to get these twill samplers woven (it’s a fraction of what I wanted to do but a decent start), and as soon as someone has been in to see about the mice I will put a topcoat on my loom and start planning for next year!

Spring Weaving will be a blast!